Five days before Veterans Day, students at the University of Miami had the opportunity to give back to the men and women who serve in the South Florida area and overseas. Lined up outside the University Center pool, several tables were filled with everyday items, from baby wipes to rice krispie treats, all waiting to be packed by nearly 200 UM students participating in Homecoming’s Hurricanes Help the Hometown, an annual service day.

Through a joint project among the Veteran Student Organization, Homecoming committee and the nonprofit Troopster, students made care packages for active duty service members. Working in an assembly line, volunteers started by building a box, then filling it with everyday supplies, before decorating it and finally writing a thank you letter to the troops. 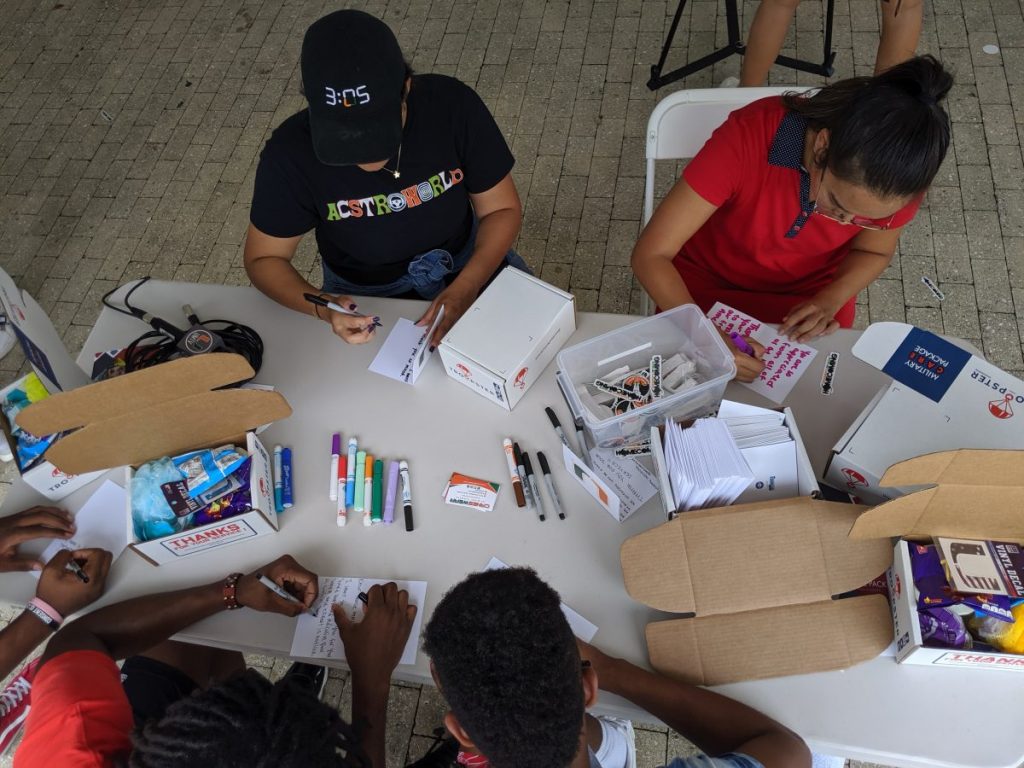 “I can’t tell you the impact of care packages,” said Chelsea Mandello, founder and CEO of Troopster, a nonprofit that helps families and organizations across the country send care packages to troops. A care package can consist of various types of everyday goods, from soap and personal hygiene wipes, to non perishable foods.

“The happiest days are when a care package arrives,” said Derek Auguste, veteran and president of VSO. “It touches you in the heart and gives you a sense that you’re not forgotten.”

A care package goes beyond the physical goods that it supplies; veterans said they provide morale.

“It’s like groundhog day, everyday can get the same,” Auguste said about the routine of being stationed overseas. But, when a care package arrived, that changed. “It reminded you that people back home care.”

“It meant the world every time we got one,” he said.

Gallagher recalled being stationed in South America, when a crate of care packages arrived for them. The packages contained chips, magazines and his favorite Kirkland brand beef jerky. “It boosted morale just to know that people took the time to make them.”

“I had received this big care package from my mom and I was so excited,” Mandello said, who was serving on a Navy boat in the Mediterranean at the time. But when she opened the box, she described feeling heartbroken after finding its contents ruined.

Butt out of this heartbreak, Troopster was born.

Mandello noticed that many of her crew members had the same issue. They received baked goods and chocolates that didn’t survive the trip and had to be thrown out. To solve this, Mandello founded Troopster in 2015, which works with organizations such as UM, to sponsor “pack events.” At the pack events, Troopster brings the necessary supplies and then teaches volunteers how to pack and customize care packages..

“Troopster was a phenomenal fit,” Auguste said, who suggested coordinating with the nonprofit when approached by the Homecoming committee.

The committee for Hurricanes Help the Hometown was looking for a way to help veterans because of how close Homecoming is to Veterans Day this year. In partnership with VSO and Troopster, the Homecoming committee brought on sponsors such as Sirius XM, KIND and the Wellness Center to help fund the event and give UM students the chance to give back. 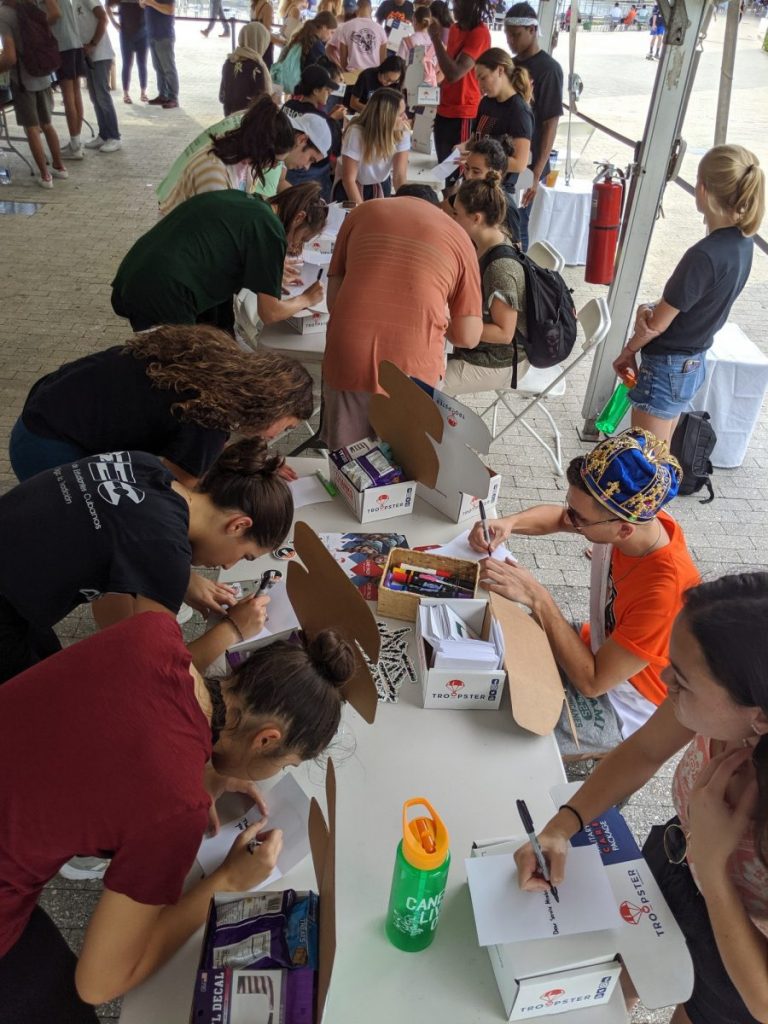 “I love the opportunity to take a break from campus life and just [volunteer],” said Giselle De La Rua, a junior studying neuroscience. De La Rua, who has family stationed abroad, said she felt a special connection to the event, knowing the “impact the care packages can make.”

Beyond an opportunity to volunteer and help the armed forces, students shared that building care packages can serve as an educational experience about what life is like for stationed troops.

“It opens up your eyes a little bit more,” said Amanda Rodriguez, a junior studying business law who attended. At the start of the event, veteran event organizers took time to tell stories about receiving care packages. Rodriguez explained that she was surprised to learn baby wipes are one of the troops favorite items to get.

“You don’t really think about troops stationed in the middle of nowhere. It’s not like Hollywood,” she said.

Gallagher agreed that the event helps raise awareness about situations around the globe. By the time Gallagher arrived to the event, he was unable to build a care package because all the boxes were already filled.

Students who missed the event and hope to learn more or volunteer, can still participate by going to Troopster.org or attending upcoming VSO events during veterans week around campus.